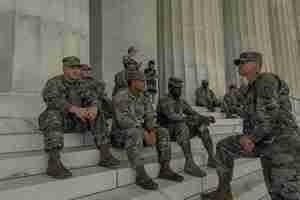 G-Shock military watch design allows them to remain functional for decades so long as you care for them adequately. However, while purchasing these watches, ensure you adhere to the military dressing code of your specific branch of operation. Failure of which might result in you landing in trouble.

It is important to note that though manufacturers label these watches as military watches, you can also acquire them regardless of whether you are military personnel or not and still use the watches comfortably.

In the world of watches, we have normal watches, luxury watches then we have G-Shock watches.

G-Shock watches are renowned for their rugged, waterproof, and shockproof design is the go-to watches for individuals like sports-oriented people, interested in high-performance watches that will not cost you an arm and a foot.

G-Shock has also branched out to design watches suitable for military use. Military G-Shock watches, unlike ordinary G-Shock watches in the market, come with additional features that make them priceless in combat situations.

These additional features include:

Larger buttons that enable easy operation even with your gloves on;

Survival features such as:

However, with a variety of military G-Shock watches in the market, you might find it challenging to select the best watch for your selected line of military work. Therefore, you will find below some of the best G-shock watches I recommend as they have the best quality at a relatively affordable price.

If you go to any reputable G-Shock watch outlet and ask for a survival watch, this is what you expect the salesperson to present to you.

The watch comes with an insane amount of survival technology in it, as you will see shortly:

The watches enhanced triple sensory technology equips you with:

Moreover, you get 40 data slots on which you can record time and sensor readings that allow you to keep track of whichever data you are interested in, particularly in reconnaissance.

However, militaries tend to have these data already but having your backup data makes the watch attractive to soldiers.

The watch comes with an automatic time calibration that ensures the time it displays will always be as accurate as possible.

The watch comes with a solar battery that ensures if things go out of the plan, you need not worry about losing the watch’s functionality.

The Casio G-Shock Rangeman GW9400-3CR manufacturers unveiled it back in 2014. Therefore, you need not worry about the price as it has fallen a bit.

From the numerous military features incorporated in this watch, you see why people rank it as the best military watch you could buy. 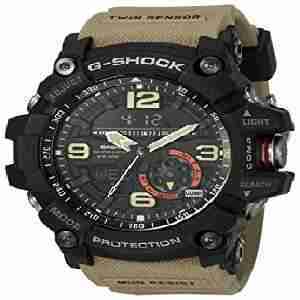 If you want the most durable watch you could lay your hands-on, this is the pick for you.

The watch is popular amongst law enforcement agencies and comes with various features incorporated in it as below:

The G-Shock GG1000-1A5 Mudmaster-Analog’s association with law enforcement and soldiers attest to its durability and functionality. The watch’s pros undisputable outweigh the drawbacks making it a worthwhile investment.

Moreover, if you feel its lack of a solar battery is something you find disheartening, you could opt for the Mudmaster GWG-1000. 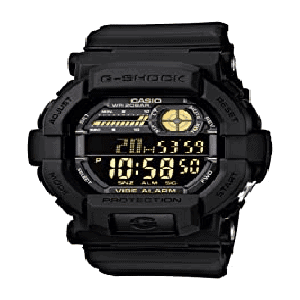 If you are in the market for an affordable tactical watch with the best features possible, this is the watch for you.

What makes this watch stand out from the rest are:

With this watch, you can directly access the countdown timer with a single button press. Moreover, the watch has a dedicated screen for this exact purpose.

While in a combat situation or behind enemy lines, an alarm going off from your watch can compromise the entire mission. Consequently, you know how valuable a silent vibration alarm is as it will enable your timing to be spot on without betraying your location.

The watch typically retails at prices under a hundred dollar mark. Therefore, the watch is quite affordable. The watches, as you have noted, come with numerous features making them the best tactical military watch.

The watch is also affordable to most individuals. 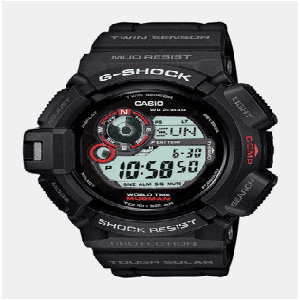 Unlike earlier mentioned watches, this watch incorporates resin-coated case back edges and rubberized buttons to protect the watch, enhancing its durability hence, a mudman construction.

The watch entails numerous features that far outweigh the minor con of lacking a multi-band six radio calibrations. Moreover, owing to it retailing at just over a hundred dollars, you will see the watch is worth its price.

Like the earlier mentioned G9300, this watch has a rugged design. However, unlike its predecessor, this watch incorporates neither a twin sensor nor a solar battery.

Nevertheless, it has a unique all-black design.

The Casio G-Shock G9000 is a classic of the army yet quite affordable. For a relatively low cost, you get various military features that make operating easy. Moreover, with numerous soldiers and police officers utilizing it, what more proof do you require to see its worth?

If you prefer analog watches yet want a military G-Shock watch, this is the watch for you.

The watch has a durable design coupled with a black and white contrast for beauty. Moreover, the watch is most of the time sold at discounts meaning you are likely to save money with this watch than most other G-Shock brands.

The deal sealer for me when it came to this watch was its analog display. However, you can get a watch with better functionality at the same price by opting for the GD350.

Unlike other G-Shock watches in this list, the Casio G-Shock GD-400 Military Watch has protective bull bars that make it rugged and durable.

Though generally considered a cousin to the G350, the G350 manufacturers equipped it better as it has a silent alarm and a button dedicated to the timer.

The watch, however, incorporates a silent mode that attempts to make up for its lack of military features.

The best thing about this watch is its design. Aside from that, its functionality is not quite up to military standards, in my opinion.

If manufacturers incorporated additional military-specific features into the watch, it would be higher on this list. 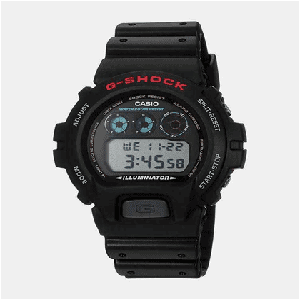 The Casio G-Shock DW6900-1V is a watch that, back in the nineties, was used by the US Navy Seals after the Rolex Submariner. The shift was due to the Casio G-SHOCK DW6900-1V being more reliable and affordable.

Because back then, the advanced military features incorporated in military G-Shock watches were not available, this watch only has basic features. However, its durability is unparalleled.

Though a good watch, the watch does not fit into the life of highly active military personnel as it lacks advanced military features. The watch is thus rendered useful only for tracking time.

If you find the earlier mentioned watches as bulky for your hands, you will find the Casio G-Shock GWM5301-1 is the watch for you.

The watch is relatively small in size, measuring 16.2 mm in thickness, and is 46mm in width. Moreover, the watch weighs roughly two ounces.

However, let the size not fool you. The watch is still one of the toughest atomic and solar G-Shock watches in the market. Yet, it still maintains its affordability.

Though the watch does not incorporate many features at its size and price; you will find it is nearly faultless.

With its roots in the 90s, this watch has a classic design that is popular amongst soldiers. Moreover, of all the watches listed, this is perhaps the cheapest watch worth your time and money.

It is rugged, affordable, and is simplistic in design. However, do not expect much from the watch aside from its basic features listed below:

The DW 9052 is arguably the most basic of all military G-Shock watches in the market. It lacks military features hence should be used as a last resort. However, considering it is from the nineties, you do not expect much from it currently also. Therefore, maybe utilize it for simple operations within the base and not in combat situations.

Do military watches have warranties?

Yes, depending on where you buy the watch, you will find a warranty.

Are military watches only for military personnel?

It is important to note that though manufacturers label these watches as military watches, you can also acquire them regardless of whether you are military personnel or not.

How long do military watches last?

Military watches, like most watches, durability depends on how you use the watch.

Can you bring a watch to army basic training?