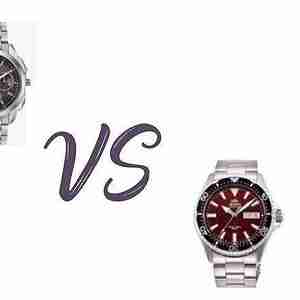 There are many watch brands in the world

Unfortunately, they are all owned by only 13 business groups. While that still provides you with a lot of choices, your money may still go to a company you do not like. The good news is that most of these watch groups still allow their brands to make top-quality watches.

You get accurate time and precision to make sure you arrive on time to an important date. To learn who owns and how good Orient and Bulova watch companies just continue to read our comparison. It has that information and more.

Who makes Orient and Bulova watches

They both started out as independent companies with the goal of making fine watches for people to wear. Bulova had the good fortune of being started in the late 19th century and in New York City. That gave it a head start over Orient.

Orient was started in the early part of the 20th century and in Tokyo, Japan. It has had many obstacles to overcome including enduring the setbacks created for Japan by their defeat in the Second World War.

What is unfortunate is that these two companies could not remain independent and continue their fine tradition of making great watches. Orient is owned now by Seiko and its watch designs are greatly influenced by that parent company.

Bulova is also owned by a Japanese firm that also makes watches. its parent company is Citizen. The quality is still in their products but may be not on as high a level as when they were on their own

Orient may have the upper hand in this category as Seiko has turned it into primarily a dive watch company. That is where this company’s bread is buttered and it does a great job in meeting its purpose.

Its Mako line of dive watches has great water resistance capabilities, an ability that exists in their lower priced models as well. That dive depth water resistance reaches 660 feet beneath the surface of the ocean.

Bulova has always had a reputation for making fine durable watches but its focus is not so much on diving but professional looks. But it too has a great dive watch that can reach the same depth as the Orient Mako. It is also very accurate when doing so.

Where Bulova out shines Orient is in its more formal or dress watch lines as those watches are made to last while looking good on your arm.

In this category, you will find that the Bulova Lunar Pilot Chronograph has some of the best features and technology added to it that money can buy. The Orient’s Defender Field Watch will match it for technology and features except that the latter watch option only has 2 sub-dials compared to three for the former watch.

However, you cannot judge a company based solely on one watch model. Both companies strive to perfect their timepieces so no matter your activity, you have a watch that is filled with all the modern technological advances possible.

READ  The Pros and Cons of Using a Smartwatch

Depending on your purpose or calling in life, you can find a variety of watches fitting those lifetime pursuits. Each watch from each company will include the appropriate technology and features that will give you the best service.

The edge here would go to Bulova though as it is owned by a company that loves to pack in the features and use as much technology as they possibly can in a watch. Seiko is not as featured-minded as Citizen.

Bulova vs Orient looks and style

The edge in this category may have to go to Orient as Seiko likes tradition, they like good looks and they like great designs. While Bulova watches are no slouch in this department, that company suffers from Citizen’s feature priority, and not every watch looks as good as it could.

They do make great looking watches with great color accents and styles but Orient just edges them out. But not by much as Bulova has had a tradition of looking good and using great style designs to attract customers.

What hinders Orient here from being an overwhelming winner in this department is that it is primarily a dive watch company. Looks and style are not as important under the water as in other activities.

Of course, you will be the final judge in this competition and what looks good to you may not look as good to someone else. In any event, both companies do have some great styles and it will depend on your purpose which one you choose.

When it comes to paying for a watch, these two companies make their products very tempting and attractive. For Bulova, you can find one of their watches priced between about $30 and $1000.

Unfortunately for that company, Orient is in the same price range. They are direct competitors and the amount you pay will depend on the style of watch you want and what features are included.

This does not mean that neither company does not have some higher priced models to look at. Orient has at least one over $2000 and two over the $1000 boundaries. Bulova has at least 2 over that $1000 marker.

Depending on your budget, you can own either brand for an affordable rate or set your savings plan back a little bit by buying their higher-end watches.

Bulova has a long tradition of selling great, durable, and practical watches. You would not be missing out on anything when you purchase a watch from this company. On the other hand, Orient has a little exotic flavor to it just by its brand name alone.

The good news for you is that you can buy a watch from both companies and get the best of both worlds at a very reasonable price. You really do not have to choose one over the other as they are both good watch brands.