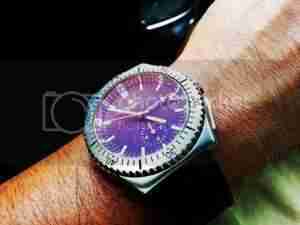 The Central Support Group for Customs is the youngest special unit founded in Germany in 1995. The exact deployment strength is unknown and is estimated at 36 men, of which probably only 25 men are on active duty. In organizational terms, the ZUZ reports to the Customs Criminal Police Office (ZKA) in Cologne. Both the ZKA and the ZUZ are based in a former barracks in Cologne-Dellbrück on Bergisch-Gladbacher Straße. In principle, information about items of equipment is subject to a duty of confidentiality, since any conclusions about the structure and operational tactics of the ZUZ could be drawn. Nevertheless, some insights could be gained.

versions of the Tutima ZUZ

Apparently there were four variants of the ZUZ watch with three different references. The classic version of the Ref. 750-42 bears the ZUZ logo on the dial. Apparently there are also one or two zero-series copies of this version that have been sold without an identification number. Basically, the proportion of logo watches from ZUZ is small. Only five watches were probably in active service. This version is also the most exclusive. There is also an identical variant without a logo, which was also delivered five times. Finally, four examples exist in the version of the normal Chronos, ref. 750-02. This version was apparently obtained later (2004) as a supplement and bears no specific marking. The first watches procured were simple titanium military chronographs, Ref. 760-02. They were procured in 1997. Twelve of these have surfaced so far.
Internal manufacturer number

With the exception of the Chronos, Ref. 750-02, which were also procured, all original ZUZ watches probably have a number beginning with DK on the back cover. According to information from the ZKA, this number was applied by the manufacturer and has no organizational significance within the customs administration. Unfortunately, Tutima does not provide any information on the facts, so that only the following conclusions remain: The internal manufacturer numbers designated in this way always have a common and an individual digit part. Example: DK 190493-024. The 24th clock of the same series is marked here. What exactly DK means remains unclear. It is interesting that these numbers apparently also existed for the Bundeswehr. Some numbers not used by the ZUZ have been spotted on Tutima Bundeswehr watches. One assumption is: It is a marking of small special series for special purposes, be it for the ZKA, the Bundeswehr or other authorities.
Tutima: Military Chronograph GermanyMilitary Chronograph Germany; The internal manufacturer number on a Tutima ZUZ is always at the end – here No. 26.

Besides Sinn, Tutima is my second favorite brand. Both brands have a well-stocked watch case with me – and both brands have their distinctive and beautiful watches.

The Tutima Militarys are really a few days old now. Made in the 80’s for the military according to their specifications and wishes (hard to compare with an EZM 10 that is 30 years younger). As it still exists today, it was also required by the military back then (there were no AR options, magnetic field protection or tegiment technology). I find it quite authentic, the Tutima Military is just a piece of watch history from the 80s/90s. Wouldn’t like it too much if upgrades and changes were made now. Because one thing is a fact: the days of the Tutima Militarys will soon be numbered. The steel variant has already been discontinued, the other model variants will also disappear in the foreseeable future due to the limited availability of the last 5100 movements.

I’m more excited to see what will come next. I doubt whether the Bundeswehr will decide again for an official, new mechanical timekeeper – here too you or the authorities have to pay more attention to money – other federal authorities such as customs have already abolished them (for cost reasons there is now a polar heart rate monitor as a duty clock). The new Tutima models don’t appeal to me personally either. Have of the “new” only ne DI300 with early ZB variant… since Tutima is currently. something “maritime” aligns (yacht and sailing) I don’t expect much anymore….unfortunately… ;(

In my opinion, revised new editions have turned out to be rather disappointing for many brands in the past – especially for Sinn (see the 142 II as an extreme slow seller… and whether the 140 B will be accepted by the fan base will be determined by the proud price (and the wrong one in my opinion). D1 space mission lid embossing) have yet to show). And the SZ-01… after 2 years of development you still haven’t gotten to the 5100… is it that difficult to develop a date display with day of the week and date?!?

I don’t have a current Tutima catalog from this year – but the older editions always included an overview of all model variants. The options (e.g. being able to order all hands with luminous material) are also mentioned in the printed catalogue. In addition, the Konzi should hopefully know all the variants.

So my conclusion would be: let the last Tutimas Militarys be authentic – no handicraft waste recast – and let this old clock dinosaur die out with dignity