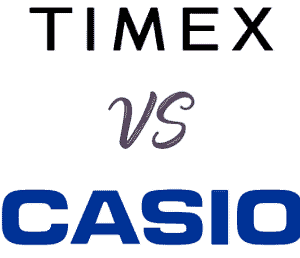 Both countries are industrial giants. they have been known to produce many great inventions as well as upgrade and dine tune older products that need a facelift. This competition has helped sharpen their skills in anything they turn their attention to.

The watch you buy may boil down to if you want American made or Japanese-made watch on your wrist. You are getting basically the same quality of watches with similar construction materials and features.

It is just that Casio thinks overcrowding is best and tries to pack everything, including the kitchen sink, into some of its watches. Either way, you are not going to be paying a lot for a nice-looking watch. No one says you have to spend $10,000 on a Rolex to look good.

A watch just has to keep accurate time all the time in order to be considered good.

This is the case when it comes to watchmaking, both countries and companies have survived the many watch wars by remaining innovative and by producing quality timepieces that look good day or night.

The good thing about this competition is that it has driven both companies to make watches for just about everyone and for every event possible. Keep reading to find out more about these two companies.

Who makes Timex and Casio watches?

Casio got its start in 1074 in Tokyo Japan. The country is known for being hard workers and for making very fine products. Over the almost 50 years of its existence, Casio has striven to be the leader in watch design and features.

However, it has had stiff competition from its American counterpart, Timex. Timex is its own company and it has had an advantage over Casio in the watchmaking industry. This company got its start in 1854 but it was a full 60 years before that company decided it was time to make watches.

That gave the company a 60-year head start over Casio and it has used that time wisely. They were the company that gave the world its first Sports watch but it wasn’t the last. Casio has caught up to Timex in that regard.

Both companies focus on making affordable watches so their products are within the reach of the every day man.

Not every watch line from these two companies will be the same. Some are stronger than others and some are prettier than most, But the Timex Ironman is said to be one of the tougher watches that the company has made.

Not only is it hard to break, it rivals Casio when it comes to features. There are quite a few features and functions built-in to the Ironman watch from Timex. Casio maintains the lead here though.

While companies can copy the number of features it puts in its watch, they are having a hard time copying the indestructibility of the G-shock watch. That watch line is said to be impossible to break and with all the features and functions Casio puts inside, it may be the superior of the two brands.

The edge will go to Casio here as Timex just hasn’t been able to match the G-Shock watch line yet.

Timex vs. Casio Features and Technology

The number of features you get in either brand’s watch will depend on the model of watch you buy. Some Timex products are like Seiko where they are traditional, simple, and basic.

Then other watch lines they make rival Casio’s sports watches to the T. The two are hard to tell apart from a distance and without looking at the name on the face of the watch.

When it comes to technology and features, Casio is just a step ahead and above Timex. This is seen in the two top models the Ironman and G-shock watches. The latter may have some similar materials used in it with the former but the G-Shock just has more technology and more features.

Then the Casio pathfinder has more features than any normal watch has room for. Casio outdid themselves when they decided to stock that watch with conveniences. While Timex may have been at this game longer than Casio, the Japanese are fast learners and know how to work to get ahead.

It is interesting to look at both companies’ different watch lines. They have similar models but when you put the two watch types side by side, Timex just has a better look to it. It is hard to pin point but most of Casio watches look on the cheap side.

That may be because the company may cut corners from time to time in manufacturing different watch styles. Then when you look at the Timex watches, there is something about them that looks just right. probably because they are not overcrowded with features like the Casio models are.

There is just a better look to the Timex both in design and style that has this company winning this comparison. It just looks better and seems to be more organized than the Casio style.

When you are in a rush to see the time you do not want to push a lot of buttons to get the time display. Casio has too many buttons for those people with large fingers.

This is a category where both companies are basically equal. Their top-of-the-line sports watches, the Ironman and the G-shock, are selling for roughly the same price. Which one you get will depend on which brand you like the most.

These two companies focus their products for the everyday man who needs a good watch at a very affordable price. While they may make the odd expensive timepiece, the majority of their watches should be under $100 or at least under $200.

When you want quality and accuracy at an affordable cost, these are the two companies to turn to. They have a watch in your price range.