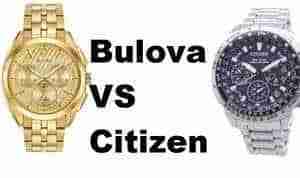 Bulova and Citizen are among the big names in the watch manufacturing industry today. These two big companies have heroic histories behind them and they have an illustrious product to show for their existence over the years. The companies have also introduced different kinds of products to the market and these are class of their own. It is not easy to decide between these companies which of them is the maker of the best quality watches. This is because the two companies are similar in various ways and there are differences between them as well.

How did the two companies start?

Bulova was an American brand hence it started in New York City in the year 1875 when it was created by Joseph Bulova. The company has introduced a lot of remarkable products and the brand has dominated America for a long time. The first-class world product that earned its global reputation was the 1as product of Bulova Accutron Watch. The most outstanding feature of this watch was the use of a fork instead of a balance wheel which was the science then. It is regarded as the first electronic watch since it was actually powered by an electronic oscillator circuit. When it comes to time keep, it has an edge over others since it keeps accurate time. when it comes to accuracy the company retained the edge as one can see from one of its greatest creations of all times which is the Precisionist. This watch features a three-prong quartz crystal and it operates at 262 kHz frequency and it is one of the most accurate watches ever created in the history of wristwatches. The watch because of the perfect technology was at least ten times more accurate than anything you can think of.

This is the moon watch

Another great brand from the company is the Moon watch. This was the watch used by the American astronaut who went to the moon. This Bulova chronograph has earned a great reputation for the company during an excursion done in the 1970s. This timepiece was regarded as the highest seller from any brand in the world.

The origin of Citizen

When it comes to the line of product, this brand has many good things to say and they have a lot of top products to boast of. It is much younger than the Bulova counterpart since it came into existence in 1918. The company was founded by a jeweler known as Kamekichi Yamazaki. He was supported by great investors at the time. Because of the support it got, the company was able to challenge the leading Japanese watchmakers at that time known as Seiko.

The company was able to take the global center stages in the 1970s when it comes with two great and most innovative watches of the time. These watches include the first-ever created titanium watch as well as the solar-powered analog quartz watch. With time the technology of the two watches especially the solar technology was perfected. The brand is known as the Eco-Drive and a popular trademark from this company.

Because of the popularity of this brand, it is not surprising that it is highly used in the world today. This kind of watch has made battery-powered watch irrelevant.

The company did not even stop here and they went on with the line of innovation when in the year 1993 they introduced another great product to the market which is the first-ever multi-band atomic timepiece wristwatch. This great innovation is germane even with modern technology. Furthermore, the company is not left behind when it comes to the manufacture of highly accurate watches, especially in highly accurate quartz watches.

Till today Citizen Caliber 0100 is regarded as the most accurate timepiece that is ever created. Even though these watches are first class and the most superior in the world, they are fantastic and affordable. One would have thought that it would have been out of reach, but that is not the case.

Comparing the two companies in watch styles and designs

When it comes to styles and designs, the two products are running neck to neck but the Bulova brand is more of the dressier type. Some of the great features of the product include a sophisticated dial as well as metal bracelets which are good for different shoe brands.

In most of its collections, it is easy to observe the presence of automatic calibers just as you would find in the open heart designs. Apart from that the company also produces watches which are regarded as sporty types.

Moreover, some of the Bulova watches are regarded as top-notch products because of the features. They are regarded as chronographic watches because of their function. These watches are water-resistant and can be used for different marine activities. Furthermore, these are durable since they are created from superior quality materials. They are more of sports watches than elegance.

This brand is more distinguishable in terms of style and design. The watches in design actually reflect the purposes for which they were created. If it is called a dive watch it would like one. In the same way, when they call a brand a military-designed watch, it would look every inch that name.

As said before, these watches are distinguishable and one can identify three lines of their products with ease. The timepiece includes land watches which include the dress, chronograph, and military as well as the sea watches which include the dive watch, and the air watch which include the aviator watch. You can tell the differences because of their characteristics which are entirely different from one another. One thing that unites the design is leaning towards what is now known as casual design. This is quite different from the Bulova design which is characterized as elegant.

Another area one can compare the products of the two watch-making companies is in the area of quality.

The first item to consider is here is the quality of materials. One thing similar in this regard is that these two brands depend on stainless steel material. The outcome is that both brands are durable, scratch-free, and they are shatterproof and they can withstand temperature changes.

The titanium materials are available in both of the company products and they are known for their lightweight design and their durability.

One thing that differentiates these two companies is the watch movement and you can tell the differences by comparing the calibers which power the two products.

The major difference as said is in the watch movement. Citizen watches use solar-powered quartz movement. This is not the case with the Bulova counterpart which can alternate its own movement with automatic, as well as quartz calibers. There is a variation from one collection to another.

Two watches to be compared here include the Precisionist made by Bulova and chronograph AT8020-03L by Citizen. Here are the characteristics of the two watches

The Precisionist feature the Accutron and this technology was pushed further by Bulova. You can see from the watch movement that it uses a three-pronged tuning fork to make for time accuracy. This is consistent and that cannot be challenged by the quartz watches.

The Eco-Drive movement uses a technology that combines quartz movement and does away with battery use. Whenever you expose this watch to light, it is powered. The implication of this is that the battery will never die once you can expose it to light.

If you are more interested in watch accuracy, it is the best option to choose Precisionist because it is more accurate and better than quartz watches.

If on the other hand that you are interested inconvenience of use, then you can opt for the Eco-Drive. Though it is less accurate the battery is always alive and this means that it is more convenient to use it.

You have seen the similarities and differences. There are areas where each of the brands has an edge over the others. It is not easy to say which of the watches is better than the other. You have to compare more features before one can decide. It depends on personal preferences.

Some people rate Citizen brand better because of the following factors:

When it comes to the use of technology, Bulova is ahead and because of the quality they introduce which is powered by high technology, they have not only attained milestones, they have reached new heights. You can see from the Precisionist reviewed above that it is powered by high-end technology. They still maintain the tradition the brands are known for which includes the use of stainless steel material. The watches are beautiful and highly durable and curved crystal. It is easy to tell the time in just a glance.

Which brand is the best?

You can see that these two brands are incredibly good. It is not surprising that these two watches have dominated the industry for a long time. you can also see from the features above that these two products come with their pros as well as cons.

You can see the attributes of Bulova watches which are large, flashy, and accurate in timekeeping. Citizen watches on the other hand are highly functional and simple in design.

In preferring one over the other, it was already said that it is a matter of convenience and preference. While making the push for a final choice, two critical factors are very important here. If you are looking for quality, well made and a watch that highly accurate in time keep, there is no doubt that Bulova has an edge here. It is not surprising with the superior technology they adopt. When it comes to the eco-friendly drive, Citizen certainly has an edge. They are solar-powered and that prolongs the battery life and that means that the battery may not even die. The battery would be there for a long time. It can save you money in the end. It all depends on what you prefer most.

In conclusion, the two products are high-end and great watchmakers. Making a choice is now easier after comparing the features discussed above. Remember that as said before the choice to make is a matter of personal choice. One might have a preference or addiction to a brand and they can prefer that brand over the other.